Alpha This is a new service – your feedback will help us to improve it.

Introducing a new tool to staff

Citizens Advice Manchester planned to launch their out of hours service in September 2020 but decided to go live in April instead, cutting the time they had to deliver a solution from months to a few weeks.

The out of hours service lets people ask advisors questions over SMS text messaging, web chat and the phone, and has been part of shifting to online service delivery in response to COVID-19. To deliver this service, Citizens Advice Manchester used a tool called Twilio.

To introduce this new tool to staff, the technical team worked with front line advisors before the service went live to design a user journey that would work. They made video tutorials and then when they launched the service, they started small so that they could fix issues on the go. 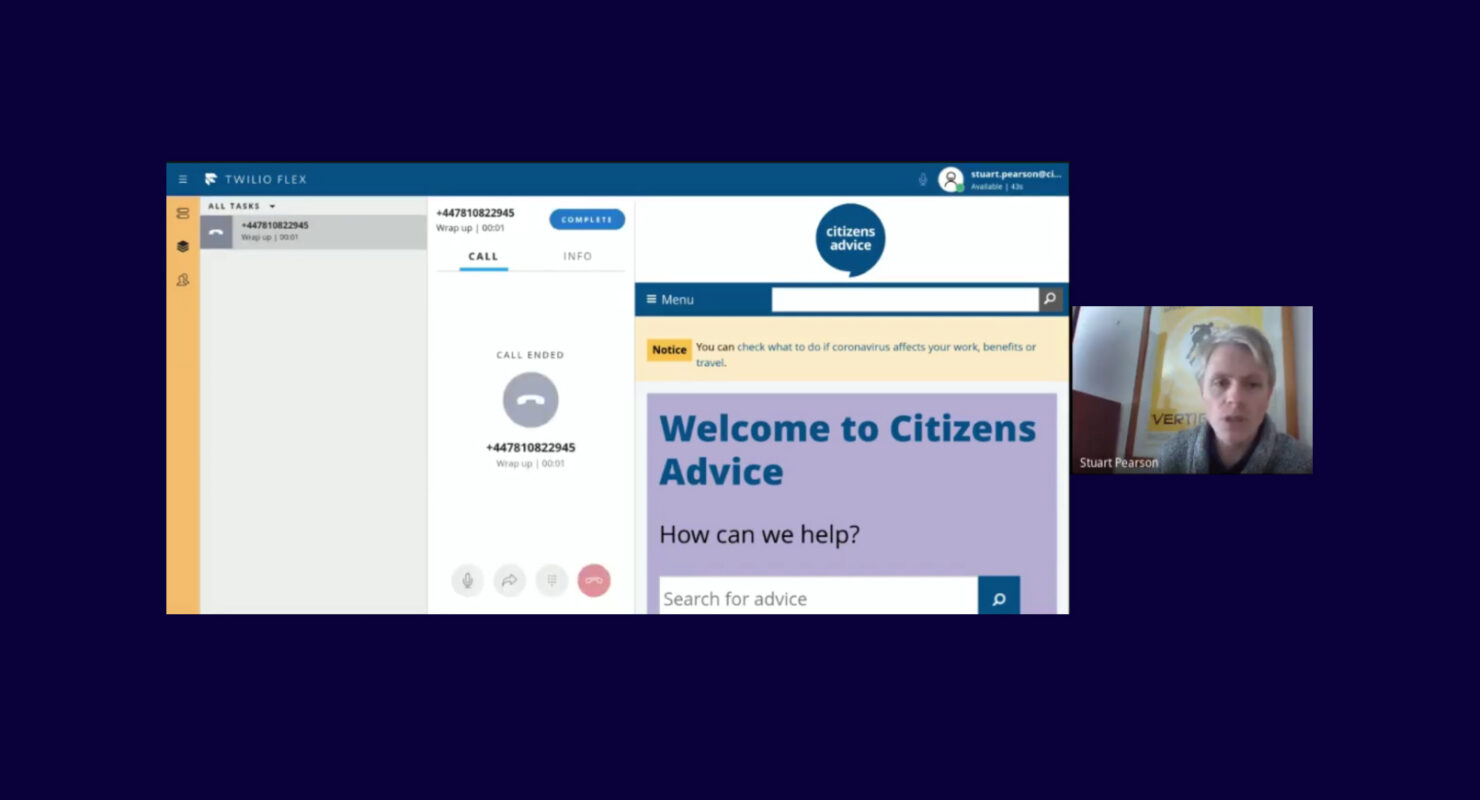 This recipe has been in use since April 2020.

We are not sharing this recipe as the perfect solution to a problem, but we believe Citizens Advice Manchester’s learnings could be very useful to other organisations.

Twilio is a cloud communications platform that integrates SMS, voice and video. Twilio.org is the social impact arm of the company.

Twilio’s pricing structure varies by volume, channel and product. They offer a $500 credit kickstart and discounts for social impact organisations.

The Twilio team can provide technical support and help configure the platform.

The platform integrates multiple communication channels into one place.

The technical team used Google Meet to create training videos for staff and to hold team video meetings. They used the Hangouts chat function to provide technical support to advisors in real time.

Google Meet is part of G Suite, which starts from £4.09 per month. There is also a free version which is available for anyone to use with a personal Google account.

The screen share and record features in Google Meet are an easy way to record a video demonstrating how to use a tool.

Google Meet is integrated with other G Suite apps including email, calendar and documents. Because they already used G Suite, Citizens Advice were able to shift to remote working much more easily.

Youtube provides an easy way to upload and share videos. Privacy functionality is available meaning that videos can be set to publicly searchable, private, or viewable only by people with a specific link.

Citizens Advice Manchester chose Twilio because it would allow them to respond to queries locally and across several channels. They also got good support from Twilio’s developers.

They began by asking who would be willing to be on the new out of hours rota and then worked with this small group of advisors to get feedback on the new solution. Letting people self-select means advisors who are more confident trying a new tool will be able to offer peer support to their colleagues later on.

3. Decide what to offer first

The team chose to start by integrating SMS text messages and voice calls into the platform. They plan to add more channels such as Messenger and Whatsapp later on, but have decided to keep it simple to begin with.

4. Make a proof of concept

The technology team set up a ‘first version’ of the platform. They tested it themselves to check that the basics were working. They would have liked to try it out with staff at this point if there was more time, as fresh eyes are a great way to spot issues.

The technical team made videos for the staff,demonstrating how to use the platform. They used a Google Meeting to share and record their screen while they went through the basic workflow of answering queries. Videos were then uploaded to Youtube so that staff could watch them.

Advisors were given some time to look around the platform and get familiar with it before they started using it for the service.

The team had a deadline they were working towards, but they knew there could be hiccups as they went live. To help things go smoothly, they launched without advertising the service anywhere. This meant that the first few evenings only had low volumes of queries, giving the team time to fix issues that arose.

The technical team were on stand-by when the service went live. They used Google Hangouts to stay in touch with the advisors and were able to fix issues as they surfaced. This was practical and also helped reassure advisors that help would be available when they needed it.

9. Get feedback from staff

As well as the direct feedback that came from advisors, the team gathered feedback at regular meetings with their leadership team and team managers. This gave them a good overview of how the service was performing.

The technical team made improvements to the platform based on the feedback and worked with Twilio to customise it further. For example, a notification has been added to alert advisors whenever there is an incoming call. This way, advisors don’t need to worry about missing something, especially if they are on a different tab or view in the web browser. Responding to feedback both makes it easier for staff to use the tool and increases their buy-in.

Now that the service is live and staff have had a chance to get familiar with it, Citizens Advice Manchester are using Facebook advertising to promote the service and are expecting volume to increase.

The technical team have existing relationships with local branch managers and advisors. This existing goodwill makes it easier to introduce new tools.

Starting small allows you to locate and fix any issues without being overloaded from a large volume of users. Citizens Advice Manchester didn’t expect everything to go smoothly, but by starting with low volumes and being on hand to fix issues they were able to quickly improve the service.

Sometimes there will be a need for a single person to take ownership when there is confusion about responsibilities. For Citizens Advice Manchester, the timelines for the service changed quickly and it was unclear where responsibility sat for some parts of the implementation. In this situation, one person stepped in to organise the project. This worked for the immediate challenge of getting the service live, but now the team is looking at how they can ensure the service is delivered sustainably.

Citizens Advice had existing safeguarding and data protection policies in place which covered the use of this new tool. In the shift to remote working, they reminded staff that these policies still apply.

The platform is still in development by Twilio. This meant that Twilio were responsive and happy to work with them on improvements, but it also meant they experienced some technical issues and work had to be done to adapt the platform to meet their needs.

It is impossible to predict what will happen when staff begin using a new tool. For example on the first shift, the advisor rostered was unable to cover the shift. The technical team had to quickly provide a way for people to request a call back.

For further information about this recipe, you can contact:

Many thanks to Citizens Advice Manchester for contributing this recipe.

This recipe is licensed under a Attribution-NonCommercial-ShareAlike 4.0 International Licence.

That means you are free to copy, redistribute, and build on the text of this recipe, but only for non-commercial purposes (if you want to use it for commercial purposes, get in touch with us at [email protected]). You must give credit to both Catalyst and Citizens Advice Manchester and link back to this page. If you build on this recipe then you must share your version under this same licence.

Do you have thoughts on this recipe? We would love to hear from you.