Alpha This is a new service – your feedback will help us to improve it.

Carefree is seeking to mobilise the hospitality industry to gift its excess capacity so that the unpaid carers who form the invisible backbone of our Social Care system can take a break. Overwhelmed by the amount of documents stored in different places, Carefree have started to use Notion to centralise everything in one place and orient team workflow around it for improved project management and delivery against its roadmap.

During the COVID-19 lockdown, Carefree have been using a Notion page to recreate a wall in their office that was used to centralise the charity’s current thinking - they’ve also found that recreating a ‘physical’ space can be useful in remote working. 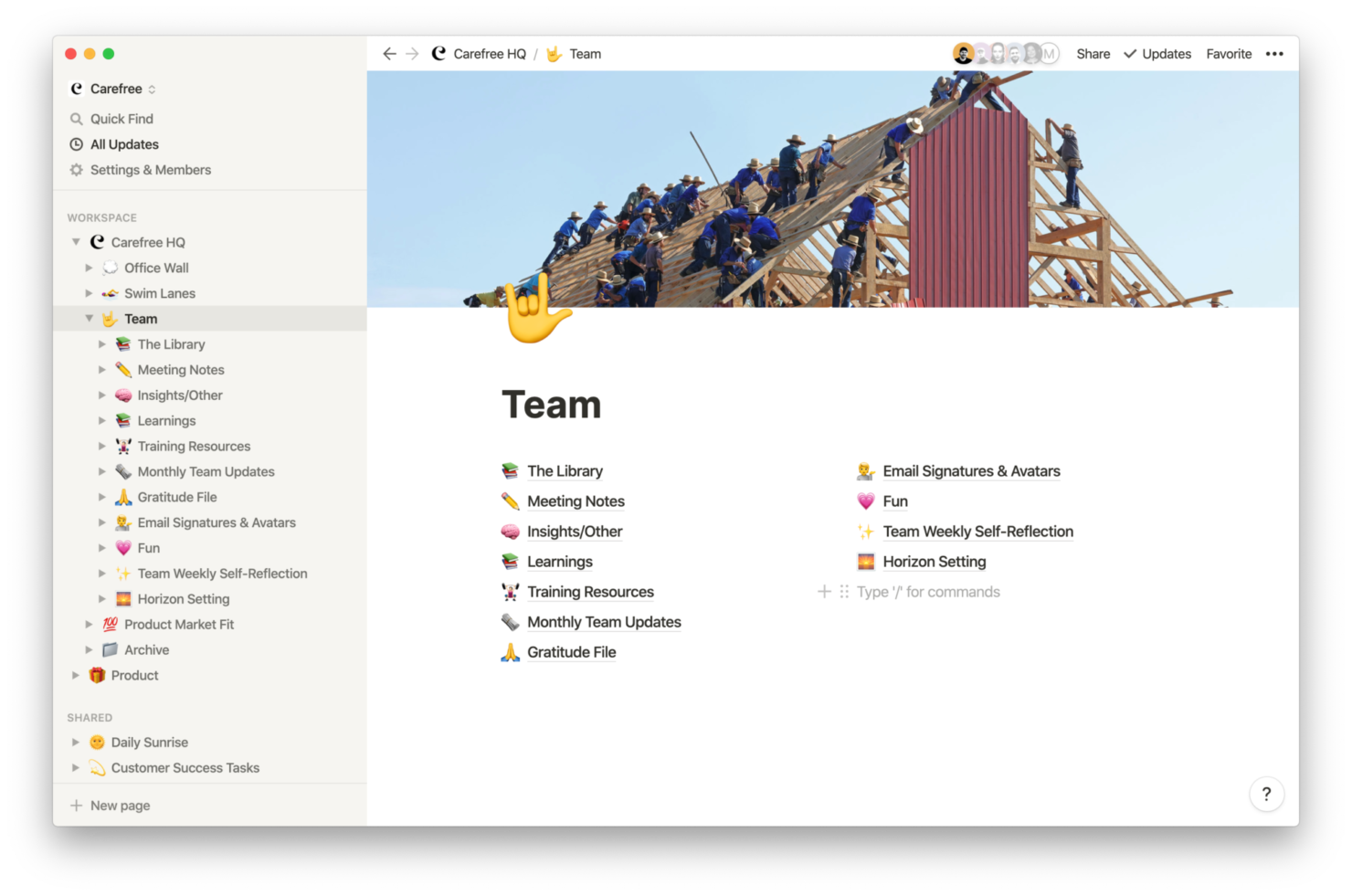 This recipe has been in use since March 2020.

We are not sharing this recipe as the perfect solution to a problem, but we believe Carefree’s learnings could be very useful to other organisations.

Notion is a highly customisable and collaborative all-in-one workspace that can act as a task management tool, project management tool, database, wiki and more. Carefree chose it because it can act as a live log for project work and central repository for many different kinds of information linked from other services such as Airtable, Google Drive and Miro.

A free version exists for personal use (with the option to invite guests) and the team version starts from $8 a month.

Notion has allowed Carefree team members to access all their documentation in a single place, making it easier to navigate and find materials/ resources/ files.

It has also helped to replace the feeling of a central office when remote working for Carefree.

Carefree found the initial setup easy, but it is worth noting that coming up with a system that works for you and gathering all necessary data can be time consuming.

Carefree uses a ‘team’ in Notion so that every member of staff can collaborate on shared documentation. Setting up a collaborative team requires a monthly subscription to the Teams pricing tier. On Notion a team is described as a group of people that wants "to write, plan, and work together in one spot."

Carefree had a lot of documentation spread across different computers and cloud services such as Airtable, Google Drive and Miro. They first identified all the documents that they wanted to centralise within Notion by linking or uploading it to one workplace.

3. Create a place for documents to live

Once Carefree decided which existing documents they wanted to upload, they made pages in Notion to act as index pages for links to all their documents. For example, they made a Team page that links to things like Meeting Notes and Training Resources.

4. Linking up documents to the shared Notion

Once they made their index pages, Carefree linked to existing local documents such as Word and Powerpoint files and cloud documents such as those in Google Drive. All you need to do is copy and paste a sharing link. Then depending on the type of document, it will either show as a hyperlink/ bookmark or it will embed within the document itself, showing a preview inside Notion.

Alternatively, you can create entirely new documents as ‘Notion pages’ so that you can view all the information without leaving the app. Carefree found Notion’s built in templates useful as a starting point. Templates include Meeting Notes, Task Lists and Weekly Agendas.

Carefree uses Notion as a central place for new employees to get familiar with the charity and how it operates. They send new employees an invitation to the team before their first day so they can start learning before they start working.

7. Use Notion for remote working

During the COVID-19 lockdown, Carefree have been using a Notion page to recreate a wall in their office that was used to centralise the charity’s current thinking - they’ve found that recreating a ‘physical’ space can be useful in remote working.

Carefree’s ‘Office Wall’ contains everything from the collection of whiteboards in their real-world office, including values, KPIs and delivery plans, so that they can be easily referred to.

Have realistic expectations and be flexible

The solution doesn’t need to be polished. Carefree found it helpful to accept that things don't need to be perfect immediately and that starting small is the best strategy. Setting up Notion has been a great opportunity for a stock intake of all their files and work. They took it as a chance for a documentation spring clean and reorganised docs and data storage structures.

Be patient and do offer support

Be patient with your team members and remember that people learn at different paces. Carefree allowed everyone to make the transition at their own pace and made sure that their team were able to get support when they needed it.

Introducing a new tool can be intimidating, especially when several are being introduced at the same time. However, Carefree found that Notion somewhat mitigates the need to introduce too many tools by being so centralised and multifunctional.

New tools may have steep learning curves during set up. Sometimes, it might be best to start with the tool’s built in templates and browse Notion’s online documentation to figure out how it can work best for you.

For further information about this recipe, you can contact:

Many thanks to Carefree for contributing this recipe.

This recipe is licensed under a Attribution-NonCommercial-ShareAlike 4.0 International Licence.

That means you are free to copy, redistribute, and build on the text of this recipe, but only for non-commercial purposes (if you want to use it for commercial purposes, get in touch with us at [email protected]). You must give credit to both Catalyst and Carefree and link back to this page. If you build on this recipe then you must share your version under this same licence.

Do you have thoughts on this recipe? We would love to hear from you.